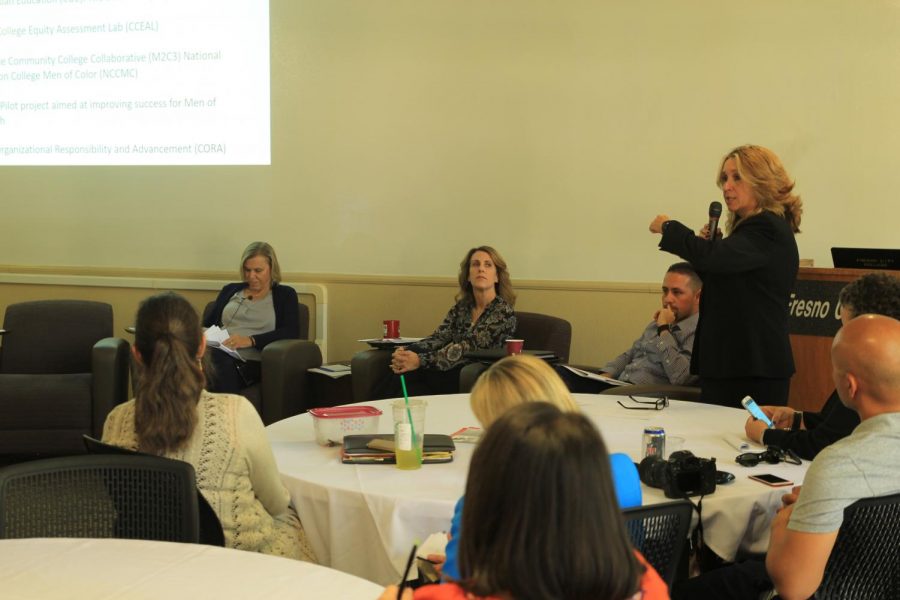 President Goldsmith addresses staff during a faculty meeting at FCC on Oct. 26

Fresno City College faculty, staff and administrators met Oct. 26 in the staff dining room on campus, to define and evaluate the school’s objectives regarding students’ success plans and transfer rates.

The meeting focused on student equity planning, a program instituted by the California Community Colleges Chancellor’s Office in an effort to increase schools’  accessibility, ESL and basic skills completion, and degree and course completion rates for disadvantaged populations.

The panel explained the current educational trends among “men of color,” breaking down statistics based on ethnic demographic groups of students. The panel then presented the outline of a two year, 12-step plan that would further improve the success rates of underrepresented student populations.

Goldsmith said the college previously had over 57 goals for their student success plan, that were reassessed and narrowed down to a list of nine clearly defined objectives for the school to pursue.

The panel also discussed the obstacles slowing the completion of these goals, including lack of permanent personnel in administrative positions such as the roles currently held by interim deans and administrators.

“My division, when I started we had a dean for a year and a half, and then we didn’t have a dean for four and a half years,” Cooper said. “There was a choice not to put a dean or an interim dean in my division, which makes it difficult to move things forward.”

Ramirez explained how there is not one definitive program or provision that can be implemented that would comprehensively close all equity gaps, but the solution to improving student success rates lies in the culture and attitude of the school and its staff.