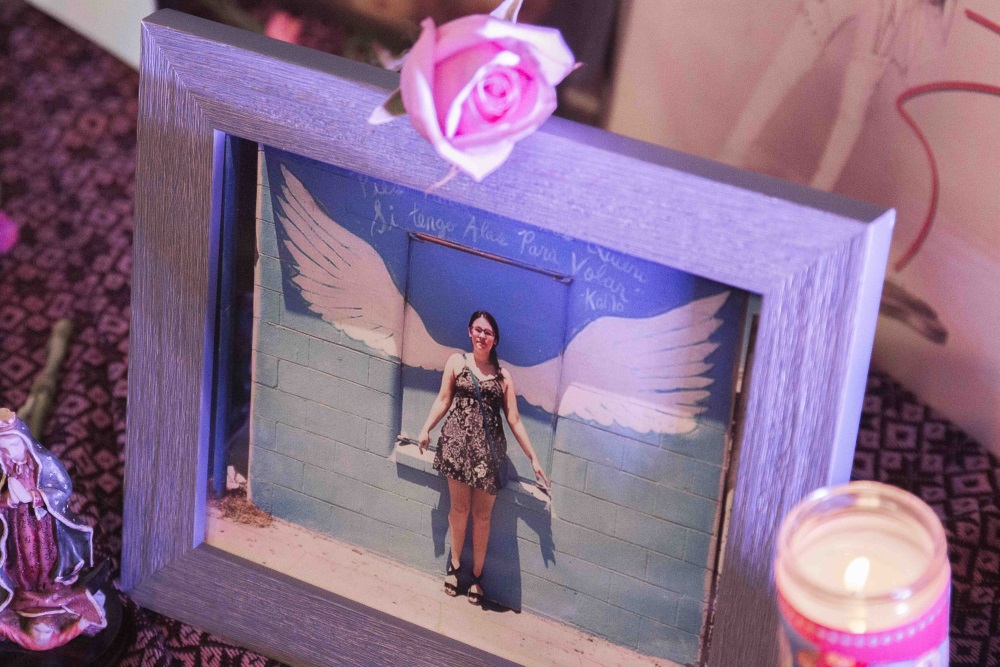 A photo of Mireyda “Mia” Barraza Martinez at a celebration of her life in downtown Fresno on Saturday, Feb. 18, 2017. (Photo by: Larry Valenzuela)

A photo of Mireyda “Mia” Barraza Martinez at a celebration of her life in downtown Fresno on Saturday, Feb. 18, 2017.

Sage burned on the evening of Feb. 18 among tangerines and brightly colored flowers at the altar created for Mireyda “Mia” Barraza Martinez in the Fres.Co building in downtown Fresno.

Succulents — her favorite plants — lined the windows. Barraza Martinez’ art and writings were projected onto the wall, providing a glimpse into the life of the poet and former Fresno City College student.

Family, friends and the poetry community came together to honor the life of Barraza Martinez, who died in a car accident in November 2016. She would have turned 30 on Feb. 17.

Dubbed “Brown Girl Noise,” the party was named after a phrase Barraza Martinez, a Chicana who grew up in the San Joaquin Valley, used and came to identify with, her boyfriend Jairo Lozano said. Barraza Martinez’s “brown girl noise” consisted of speaking out against patriarchy, oppression and racism with pride, power and poetry, said Lozano.

Among the many milestones Barraza Martinez would have accomplished in 2017, she was the most excited about turning 30, according to Lozano, a marriage and family therapist.

“We were very close,” said Lozano, who is also a hip hop artist. “She was so eager to finish her program and start working in her community and to write and publish work.”

Barraza Martinez would have finished her master’s degree in creative writing and poetry in May. And, Lozano added, April would have marked their fourth anniversary together.

“She was a huge support for me, not only as my best friend and as my partner but also creatively,” he said.  “She was very inspiring; she was very motivational.”

Barraza Martinez was a former Rampage reporter and FCC tutor. She had a bachelor’s degree in English from Fresno State and was working on her master’s at the time of her death.

In August 2016, Barraza Martinez was the first chosen by U.S. Poet Laureate Juan Felipe Herrera to work as a graduate assistant in the new Laureate Lab Visual Wordlist Studio. The studio welcomed students to work on poetry, writing and crafts.

Lozano and Barraza Martinez’ family reached out to the community for Saturday’s event, and received a lot of help to honor her.

The night started off with music and poetry readings by her friends and colleagues, including Lee Herrick, the Fresno Poet Laureate. Fatty Cakes and the Puff Pastries, an all-woman band and Barraza Martinez’ personal favorite, performed. A DJ played oldies and some of her other favorite music.

Lozano said he met Barraza Martinez through mutual friends, and they dated for three and a half years.

“She helped me with a lot of my work, not only my art and my music but also my school,” he said. “She taught me a lot about poetry and literature; about spirituality and connection to community; the passion that is necessary to put behind work that is effective.”

Barraza Martinez had a lot to give, not just to him, but to the community, Lozano said.

As an activist, student and poet, she was proud to be from the San Joaquin Valley. “She wanted to stay in Fresno for the rest of her life and work here,” he said.

In one photo, Barraza Martinez wears a gold “559” necklace, proof, friends say, that she loved Fresno.

Although she grew up in Porterville, Lozano says she really blossomed into the person she was after coming to Fresno.

“She spent a considerable amount of time at FCC where she learned a lot about her culture and she was able to develop her identity and find her voice.”

Shortly before her death, Rafael Avitia, a teacher at Mountain Vista Continuation High School in Madera, was having his students read a self-published book of her poetry.

He says his students could relate to her writing and were enjoying it. “[It was] the words she used, the experiences she used; her parents working in the fields, and growing up in the neighborhoods where it was rough and just struggling.”

When she died, it was actually through Lozano that students learned of Barraza Martinez’ passing.

“When she passed, one of the things that was ironic was that the kids were reading her poetry and loving it,” he said. “And I couldn’t tell them what had happened.”

He was trying to recruit for the Brown Berets and Barraza Martinez stood out to him. “It’s great to see young Chicanas like herself taking a position and being out there protesting, marching, and then taking time out to write poetry,” he said.

Avitia said she was instrumental in helping the Brown Berets form because she knew a lot of the members from her time at FCC.

“Although she went on to Fresno State, she remained with us and gave her time to help us raise funds,” he said. When the berets gave out one of their first scholarships to a high school student, Barraza Martinez read her poetry at the event.

He praises her for what she inspired in his students. “I think it kind of brought things home to them because everything she was talking about was life in those poems.”

Lozano said the celebration, filled with dancing, flowers and laughter, was something Barraza Martinez would have wanted.

“[She was] happy and positive and vibrant,” he said.

“She meant a lot to me. She meant everything to me.”