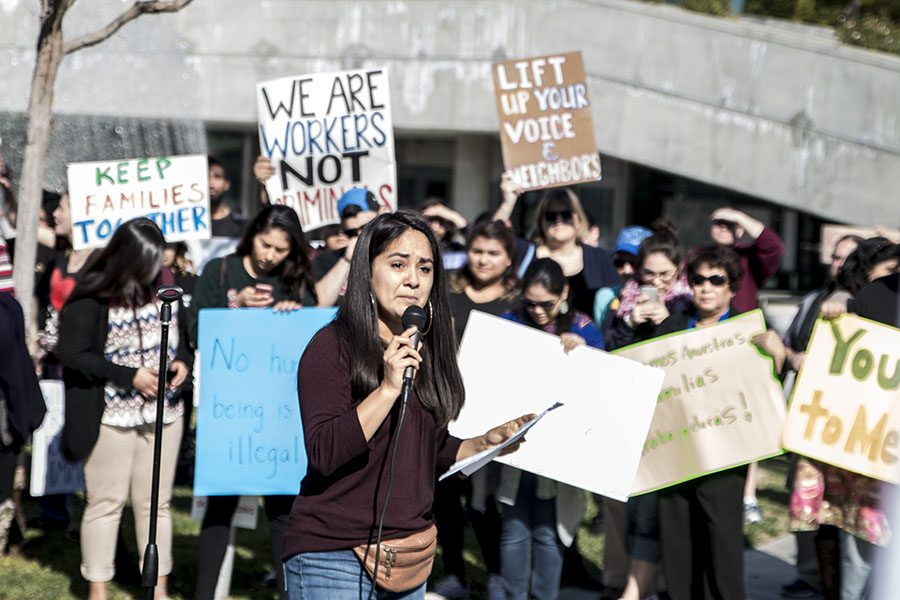 Protesters gathered in front of Fresno City Hall on Jan. 27 to voice their concerns about Mayor Lee Brand’s decision to not declare Fresno a sanctuary city for undocumented immigrants.

The protest began shortly after noon, and lasted about an hour. Approximately 250 people were in attendance and there were speeches from the protest’s organizers, community leaders and local citizens, all expressing their fears for undocumented immigrants under a Trump Presidency.

President Trump signed an executive order on Jan. 25 which will strip cities of federal grant money if they do not cooperate with federal immigration authorities.

According to an article that appeared in the Fresno Bee on Jan. 25, Lee said he will not make Fresno a sanctuary city because he doesn’t want it to be “ineligible from receiving potentially millions of dollars for infrastructure and other types of projects.”

Ariana Martinez Lott, one of the protest organizers, said she was protesting for her neighbors and people of the community and she was surprised by how many people were in attendance.

“I honestly was not expecting this much of a turnout,” Lott said. “I was just trying to gather a small group of people to stand in solidarity, and Fresno really showed up.”

The crowd chanted “No papers, no fear,” and called for Brand and the city council to hear their message to make Fresno a sanctuary city.

A detailed profile by the Migration Policy Institute released in 2015, states that there is an estimated 85,000 unauthorized immigrants living in Fresno county. Trump’s executive orders to enforce immigration laws and punish cities that don’t comply leaves many residents worried.

Fresno City Councilmember Esmeralda Soria spoke at the protest and said she had spoken to Brand the day of his announcement. Soria said she told Brand that his declaration “instills that fear that many of our immigrant communities have been feeling since the election.”

As the child of immigrants, Soria says she understands the worries of immigrant communities across the nation.

“It is great to see such a diverse crowd,” Soria said. “A lot of people come from immigrant families, and I guess we all came at some point from immigrants. I just wanted to make sure the community knew I was standing in solidarity with them.”

Matt Watson Espinoza, instructor of Chicano-Latino Studies at Fresno City College, said he wanted to show his support for the community and stand up against Brand’s refusal to make Fresno a sanctuary city.

“In taking such a stance, he [Brand] is very clearly revealing that he doesn’t know Fresno,” Espinoza said. “He doesn’t know who is in this community, who’s built it, and who continues to build it, and who continues to feed us and put food on our tables, and that has been the undocumented immigrant community. I feel like it showed me very quickly that he is out of touch with the place he is meant to govern.”

Another protest will be held on March 16 to call on Brand to reverse his decision and make Fresno a sanctuary city.