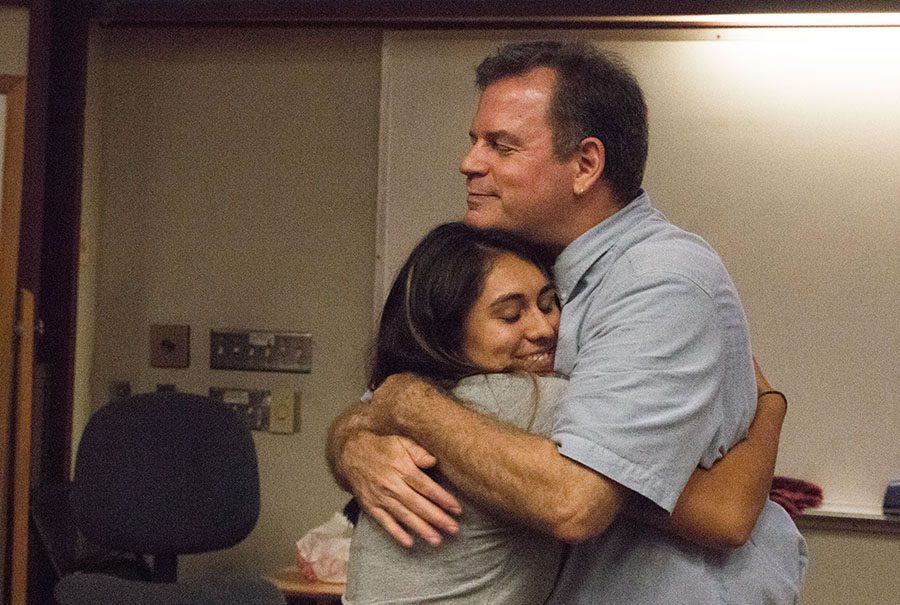 Eric Field, survivor of the Sept. 11, 2001 attacks on the World Trade Center in New York, hugs a student during a speech at Fresno City College.

Eric Field sat in the emergency room of a New Jersey hospital around 2:30 in the afternoon on  Sept. 11 2001. Field noticed the nurses, orderlies and doctors staring at him and another man sitting on the exam table next to his. Dazed and feeling self-conscious, Field asked the doctors and nurses why they were staring at them.

A nurse told Field that he and  were the first survivors of the terrorist attacks on the World Trade Center who were brought in to the hospital. The doctors had been waiting for more survivors to come into the hospital since the first plane hit the North Tower at 8:45 a.m. but had seen no others.

For most Americans, it is quite daunting and extremely confusing to comprehend what has been said about 9/11 in the 15 years since the tragedy — the fury of blind patriotism that swept the nation after the attacks; the invasion of Iraq; the rising fear and mistrust within the population and the politics of hate.

But for New Jersey native, Eric Field, relating his experiences as a first responder in the 9/11 attacks remind Fresno City College students about the human element of a historic tragedy that took nearly 3,000 lives. Field’s love for God, his sense of justice, his empathy for others, and his sensitivity is powerfully relayed when he recounts his life story and what he went through on that September morning.

Born in the early 1960s, Field recalls his childhood with his  siblings was a typical suburban and religious upbringing. His parents divorced when he was about six and remarried other people. “It was a good move; they did not do well with each other at all,” Field said. “Things happened in their lives. They found other people, married them. They have had awesome marriages since.”

He grew up in the New York Metro area during the the Civil Rights Movement of the 1960s and 70s. Field said he was aware of the social and political upheaval that was shaking the nation at the time. His parents instilled in him a sense of fairness and responsibility for others.

“I was raised by my parents in a very multicultural sense,” Field says. “Even though I have prejudices and things will always come out in the family and people will say things—we have always been raised to respect people and help people.”

Field and his family moved to a number of little towns near New Jersey, Philadelphia, and New York. In the 1980s he attended the Philadelphia College of Art to study figure painting and sculpting. Field admits that he had a hard time explaining to the elders of his church that he was leaving to “draw naked fat people.”

He eventually lost interest in art and wanted to start working with people so he decided to study journalism. He quickly found out that he was not suited for journalism because it is “math with words” and began to get into more social work.

He continued to work in diverse fields and situations so he could help people. He worked as a missionary, a lifeguard, in healthcare, and in mental health services. In the mid-90s, he was also attending Nyack University in New York to become a pastor.

In 2001, Field was living in a small New York town near the woods where the Tri-State points met.  He liked the quiet seclusion that the woods brought him, and he was also just a train ride away from Manhattan. On Sept. 10, 2001, on his way to work, he opened what he thought was a receipt in the mail, but it turned out to be a returned money order for a speeding ticket that he had overpaid. He called the local police department and was informed that a bench warrant would be issued for his arrest if he did not pay the exact amount.

He said he was on the train to Manhattan the next morning to get a new money order. On the platform, he spoke with a regular commuted named Frank. They did not know each other very well but they would always greet each other and make conversation as would wait for the train. Field rode past his usual stop and saw Frank walk towards his office in the North Tower.  It would be the last time Field saw Frank.

After exiting the train under the South Tower, Field noticed burning papers falling from the sky. He called his work and they told him that a plane had crashed into one of the Twin Towers. The buildings were too high for Field to get a clear view and he simply thought that a pilot had accidentally crashed a small plane into the building. He remembers a lady in a work suit walked past him in a state of shock, mumbling, “It’s gone. The whole 95th floor is gone.”

Field could not make sense of her statement and continued towards the post office to buy a money order.

As he left the post office, a large man was running down the street yelling, “We’re being bombed!” The second plane had hit while Field was inside the post office.

Field pulled out his cross, ran towards the WTC, and said aloud, “God, please don’t let me f##k this up.”

Field thought that if he couldn’t save any people, he could be with them when they all died.

“When I asked people, ‘Can I pray with you?’ nobody said no,” Field said. “We all figured, we’re probably going to die, and we just needed to know God was with us in the middle of this horrible thing.”

The first thing Field tried to do was meet up with the other chaplains and get into the building. He met up with an Italian priest who could not speak English, and they almost made it to the base of the building when they heard people screaming about a third plane coming. Field stopped, grabbed the priest against his will, and ran back up Broadway street.  What was thought to be a third plane actually turned out to be one of the plane engines falling through the building.

Field and the priest got separated and as he ran back towards the gathering site for Chaplains, the South Tower fell.  A cloud of dust and debris swallowed the street and he escaped by diving into a building at the last moment.

He then ran outside to pull people from the cloud of dust. He would drag them into the safety of the building and head back outside to bring more in. With the help of some others, Field pulled in 300 to 400 people.

Many people in the building with him thought that they were living their final moments and Field wanted to console them through such horror.

A few hours later, Field was rounded up along with others in the vicinity of the fallen towers, hosed down by the Fire Department, and admitted to a hospital in Hoboken, New Jersey. He sat in a numb state of shock as the doctors and nurses desperately looked in on them. The Emergecny room’s second occupant had worked in the North tower his daughter worked in the South tower.. Field was with him in the ambulance when he received the call that his daughter was alive.

After being released from the hospital, Field rode the train all the way home curled in the fetal position. Even months after the tragedy, Field would suffer from Post-Traumatic Stress Disorder. The sound of a UPS truck coming down the road would send him cowering behind the toilet.

He says that since then, he pays a lot more attention to his surroundings and people in it.  The U.S. was in shock after the attacks on 9/11. After the initial mourning, anger, fear, and unbridled patriotism began to cultivate around the event. Field condemns the spectacle that has been built around 9/11, the following war, and the rise of hostility towards Muslims, and people that appear Middle-Eastern looking.

Field has also dealt with issues of survivor’s guilt, and has been asked by people if he had wished he had died that day so he could be with God. He said that he has to continue his life after having survived such a horrible ordeal because the people that lost their lives that day would want him to.

Field continues to wrestle with what he went through but keeps moving forward. He came to Fresno in 2005 for a girl he had known since his college days back east. She was from Clovis, and they had kept in touch over the years. They got engaged  but after about a month, they broke up and Field never saw her again.

Field began taking classes for nursing at Fresno City College and was taking a political science class taught by Professor Mark Trezza. When he offered to share his experiences on 9/11, the instructor gave him the entire class session.

Though Field doesn’t tell his story too often, he recounts the WTC attacks the only way he knows how — as a human being who survived the horrific event. He tells students what he and other people went through, even if it is extremely morbid and graphic.

“Before I talk to anybody, or give a lecture, I’m praying God will remind me of stuff that will tear me up,” says Field. ”Because I can’t just let it be stale history. I can’t just let it be a historic event that happened 3,000 miles away. I’ve got to connect with it, and convey it, and it’s got to be personal.”

Field was developing his own business in the manufacturing of bicycles, gym-sets, and playsets, when a back injury prevented him from that work, and he is now shifting gears towards more clinical work. He plans to continue his social work, get back into chaplaincy, and working with people at risk.

Field’s bravery in the face of horror is rare and genuine. Though he is modest, his courage and love for other people is what is truly inspiring.

“People call me a hero. I’m not a hero,” Field says. “I’m a regular guy who’s helping people out. There is no hero thing here.”