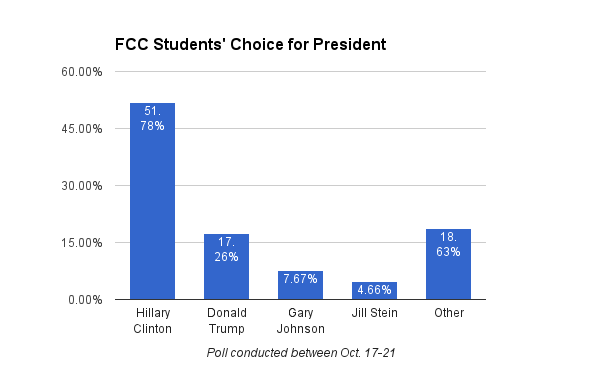 Of 500 respondents, the Rampage found that nearly 52 percent of the students favor the democratic candidate for president compared to 17 percent for her republican challenger, Donald Trump.

Trump isn’t exactly the second choice for students who said they are voting.  About 18 percent of respondents said they preferred neither Clinton nor Trump for president.

Among students who were polled by the Rampage, 87 percent said they have registered and will be voting on election day; 12 percent of students said they were not planning to vote this year.

For those who are voting, the top issues of concern in this election include college affordability, economy, immigration and health care.

Clinton and Trump both have laid out plans for college affordability and boosting the economy. 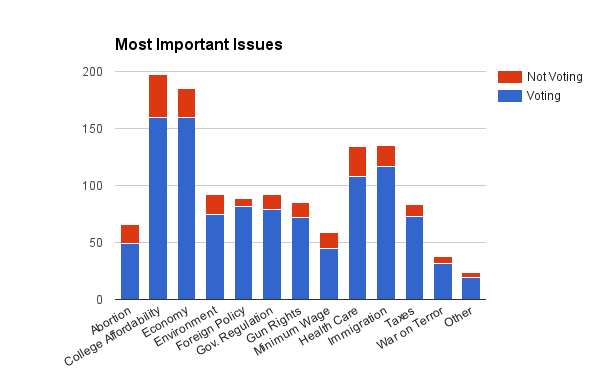 On college affordability, Clinton pledges to make higher education debt-free. According to Clinton’s plans, She plans to make four-year universities free of tuition fees for families making up to $125,000 by 2021.  Additionally, every student whose family makes less than $85,000 will be granted free access to college.

Community college is expected to become free under president Clinton and about $25 billion in funding will head to historic black colleges and Hispanic and other minority-serving institutions, according to Clinton’s plan.

Clinton also plans to fix college affordability issues for veterans attending college under the G.I. bill. She also vows to crack down on for-profit colleges, which she claims engage in “fraud and abuse.”

“Under my plan, you will be able to refinance to the rate that currently exists,” Clinton said in a speech on college affordability in Claremont, New Hampshire. “So all those students with 5 to 10 to 12 percent, they’re going to be able to drop it to 3.5, 3.8 [or] 4 percent. I believe this will save thousands of dollars for many students.”

Under a Trump administration, student debt would not be completely abolished, but rather students would be assisted in reducing it.

While Trump acknowledges the high student-debt figures for many U.S. students and believes they must be addressed, he says the loans taken out by students cannot be forgiven.

However, Trump said he doesn’t believe any profit should be made by the federal government from loans students take out.

“Do you think this has anything to do with why schools continue to raise their tuition every year?” Trump asks in his book titled Crippled America.

Among other ideas under his education plan, Trump supports cutting the department of education and making schools more competitive.

Key points of Trump’s college affordability plan also include reducing the overall cost of college and debt. The republican hopes four-year universities as well as vocational and technical colleges become easier to access and pay for.

Throughout the debates, Trump claimed to use his knowledge of business to create jobs and bring industry back to America.

Trump said that he would “reform the tax code and trade policies to make it easier to hire, invest, build, grow, produce and manufacture in America,” according to theodysseyonline.com.

The Republican nominee also wants to reform trade deals around the world in order to secure more jobs at home. He opposes the Trans-Pacific Partnership and wants to renegotiate the NAFTA deal between the U.S. and Mexico.

He plans to “tell NAFTA partners that we intend to immediately renegotiate the terms of that agreement to get a better deal for our workers,” according to his official website. “If they don’t agree to a renegotiation, we will submit notice that the U.S. intends to withdraw from the deal.”

Trump cited the movement of several factories moving down to Mexico as reasons for his attack on the plan, namely the Carrier Air Conditioning Plant.

He also plans to begin the reduction of the trade deficit by using the secretary of trade to accuse China of currency manipulation.

Clinton claims to use the tax code to encourage job growth and increase social programs.

“We need to raise pay, create good-paying jobs and build an economy that works for everyone—not just those at the top. I’ll cut taxes for the middle class, raise the minimum wage and ensure the wealthiest pay their fair share,” Clinton said in the first debate, according to globalcitizen.org. “I’ll invest in infrastructure, clean energy, and education. And I’ll help parents balance work and family.”

Raising tax accountability on corporations and the wealthy will increase income that can be redistributed back down to relieve financial stress on working families, according to her campaign website.

Clinton plans to close tax loopholes that large companies use to avoid paying taxes as well as rewarded. 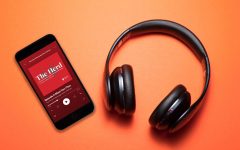