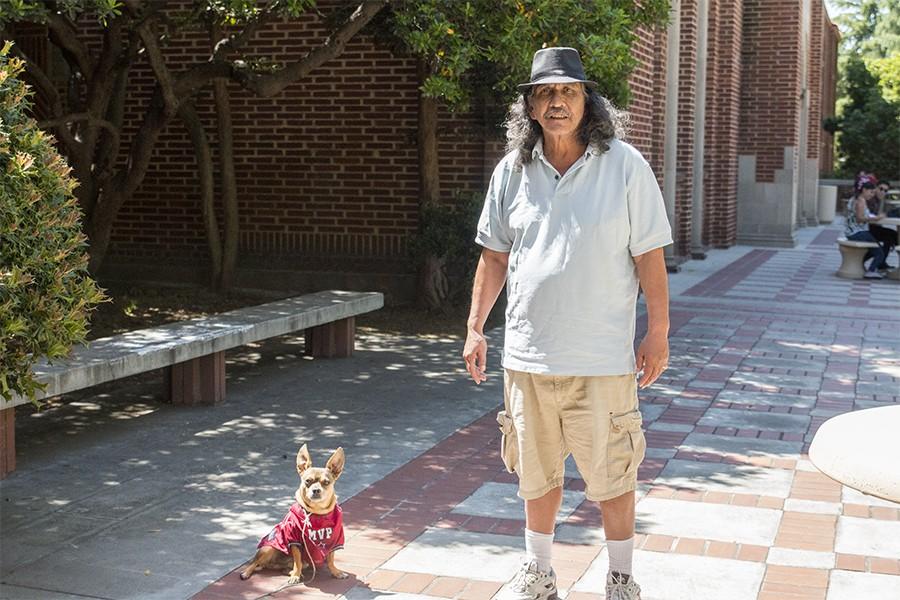 Larry Rodriguez stands next to his dog, Zapata outside the Fresno City College Library building on April 13, 2016. Rodriguez says his pet dog helps him get through college. Rodriguez and Zapata have become familiar faces on campus.

Outside the Tutorial Center at Fresno City College, Zapata, a small, brown dog sits patiently, stoically even, waiting for its owner.

He wears a red shirt that reads, “#1 Fan EOPS,” and seems to be at ease, yet slightly cautious around the flurry of activities by students that pass near him.

Eventually, the doors open and student Larry Rodriguez walks out. Zapata jumps up excitedly — his wait is finally over.

Rodriguez, the man behind the dog that is such a familiar face around campus, reaches out to give an Apache handshake to a passing student. He  jokes that it’s good for keeping away germs.

Then he turns to Zapata and with a wave of his hand, the dog is by his side. He wonders aloud if Zapata needs to be tied up, then laughs.

He explains that Zapata was given to him four years ago by a former neighbor.

“A friend of mine passed away,” Rodriguez says solemnly. “He had cancer [and] asked me, ‘Larry, do me a favor, can you take care of Zapata for me?’”

Rodriguez says he then trained the dog, which now he follows him to school every day.

In fact, Zapata goes just about everywhere Rodriguez does, including his classes.

How does he know if an instructor will let Zapata into class?

Although Zapata is friendly and Rodriguez often greets other students with a huge smile, he admits that it wasn’t always this way.

The former youth counselor has a past that at one point cost him his freedom.

He admits that his temper led him through a string of events, including a strong arm robbery, which eventually caused him to lose his job and become homeless.

“I used to be a very violent person,” Rodriguez says, turning serious.

“You know how people have [those] little buttons [that say] alcohol or drug-free? I think they should [make one] that says ‘hit-free’. I haven’t hit anyone in two years.”

Rodriguez was born in New Mexico and lived his young life on the Mescalero Apache Indian reservation before coming to California.

He found work as a youth counselor, but his violent behavior eventually landed him in prison.

Rodriguez says that since he’s been out, he is changing his ways.

“I came back to school [because] I can’t find a job. This is like a job,” he adds. “It’s like going to a job eight hours a day, because that’s how long I usually stay.”

While Rodriguez is getting his life together, he and Zapata live in Fresno’s Chinatown. He hesitates to call himself homeless, but says he would not exactly call where he lives a home either.

After he and Zapata leave FCC in the evening, they return to community apartments.

“There’s maybe 50 people that live there and they have like three bathrooms and three showers,” he says. “Sometimes you really need to go and you have to run across the street to a store or something.”

He also talks about the toll his living arrangements take on his schoolwork.

He is also concerned about general safety.

“You can’t have any stuff. They’re always breaking in your apartment when you’re not there,” Rodriguez said. “There’s a lot of violence, a lot of drugs, a lot of prostitution.”

He tries to stay away as much as possible from his “home”. “It is a struggle as far as maintaining my sanity and trying to educate myself,” he says. “I’m trying to get rid of that stigma.”

Rodriguez admits it is difficult at times to keep out of trouble.

Despite his struggles, Rodriguez says he is now on the right track to success.

“I’d like to go to [Fresno] State. I’d like to continue [my education],” Rodriguez says. “I’m thinking about going for my masters, maybe doing teaching. Maybe become an instructor here [at FCC].”

Every morning Rodriguez is woken up by Zapata whimpering in his ear. “He knows I have to go to school,” he says. “Dogs are pretty much human.”

Like Zapata, Rodriguez seems content yet cautious about where life is taking him next. He says, “It’s just me and Zapata.”