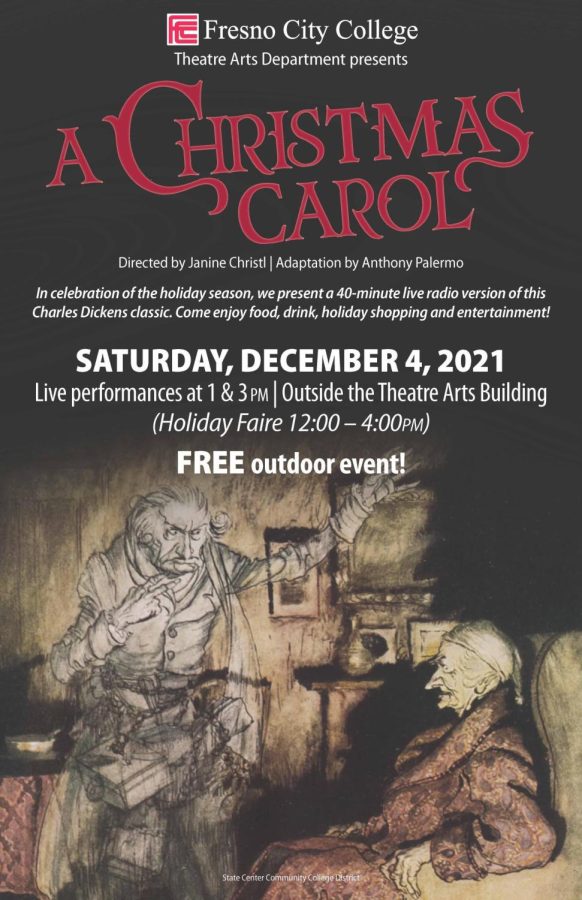 Fresno City College’s theatre arts department will be having a holiday faire on Dec. 4 from 12 p.m. to 4 p.m.

At the faire, the department will perform Charles Dickens’ story, “The Christmas Carol,” at 1 p.m. and 3 p.m. outside of FCC’s theatre arts building.

At both times attendees can watch the play in-person or listen to it on the radio.

“The Christmas Carol” will be a Hollywood 1940s radio broadcast and tell the story of Christmas past, present and future.

According to Kathy Bonilla, FCC’s public information officer, the theatre arts department partnered with the local radio station, KYNO 940-AM, to broadcast the performance.

Brooke Aiello, vendor fair coordinator and adjunct theatre professor at FCC, said there are a couple dozen students working on the production, from the cast to the horticulture department helping with sets.

Dezrei Heinz, a student who plays Mrs. Cratchit in the play, said the only challenge she faced was that the radio version is shorter and character discovery is not there.

However, she is excited for the radio version.

“The fact that it’s going to be accessible to others who aren’t able to attend the fair makes me really happy because we will reach wider audiences,” she said.

The fair’s goal is to bring the community together and show that the theater department misses performing.

Aiello noticed a difference in the interactive experience between teaching remote learning and in-person, with it being tougher to teach online.

“Teachers don’t teach to get rich, even at a college level, so it’s been lovely to work one on one with students again,” she said.

Adam Khouzam, a student who is casted as Bob Cratchit, also believes there is a different experience rehearsing in-person that can’t be achieved through a screen.

Khouzam said that in-person there is a better understanding of direction and camaraderie amongst the cast.

According to Aiello, the theatre arts department is going with a vintage holiday style for the faire.

There will be 15 vendors selling an array of items including textile art, jewelry, succulents and more.

Admission and parking will be free.