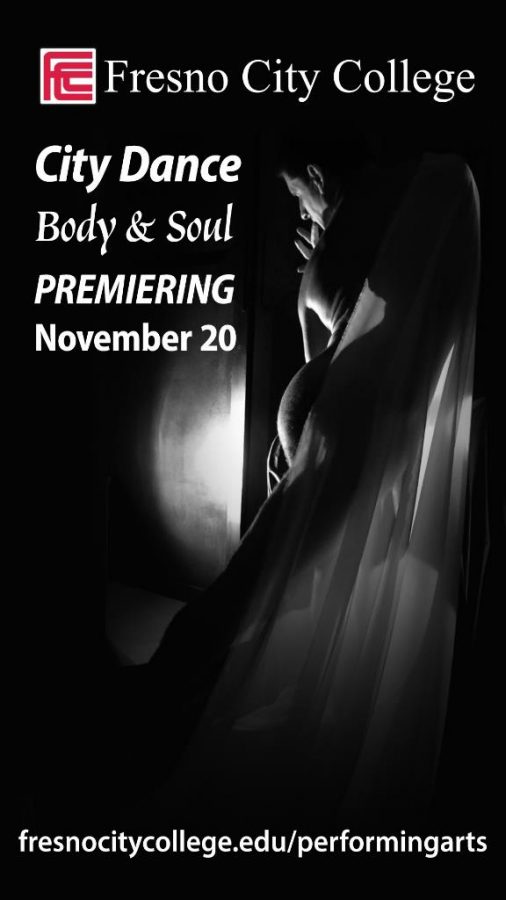 The Fresno City College Dance Department’s City Dance Fall 2020 Concert premiered Friday Nov. 20. Here is the behind the scenes scoop of the concert, which like many other virtual concerts, did not come to fruition without its own set of challenges.

The production, dubbed “Body and Soul,” began its preparation at the start of the current fall semester.

This semester, the concert spotlighted the pain, anger, and other emotions felt by the students and staff as a result of the ongoing pandemic.

“With this online event, we intend for the audience at home to feel our City Dance soul and spirit,” said FCC Dance Director and Artistic Director of “Body and Soul,” Jimmy Hao.

“We also hope that viewers experience hope while watching our body movement, body language and body artwork,” he said.

In order to comply with COVID-19 safety measures and make sure everyone involved in the production was safe, students and faculty had to find new ways of putting the show together

“This time, all dance pieces will be solo acts,” said Hao. “This was hard for all of us because we are used to dancing together and we were not all physically together during rehearsals,” he explained.

The 12 acts, composed of 14 dancers and three student and faculty choreographers, were rehearsed individually with limited timed access to the on-campus stage and studio facilities.

Viewers of the YouTube-broadcasted concert were in for a variety of dance styles ranging from Modern, Ballet, Contemporary, Hip Hop and Ethnic.

“We wanted to use a variety of different styles of dance to help us express ourselves in different ways,” Hao said referring to the differences in emotions felt by the also varying performers.

One of these performers is guest dancer and former FCC student Zachary Segovia, who reflected on his participation in “Body and Soul.”

“Much of the way that we prepared and rehearsed was done at home and we had very little time to use the studio space on campus to practice what we were coming up with as a group and as part of our homework assignments,” Segovia said.

“One of the most challenging changes for me was having to rehearse with a face mask on,” he said. “Not to sound as if I’m complaining, but it sometimes felt like if I was going to inhale my mask, especially during the strenuous exercises because it hinders your ability to breathe.”

Segovia shared that along with his ability to feel comfortable with how much of his body was exposed on stage to fit the “Body and Soul” concept because of how raw his piece is, being able to dance with his non-human dancing partner also turned out to be quite the challenge.

“Even though I am doing a solo, I’m not the only dancer on stage. I am dancing with a long black cloth fabric. It is very dynamic and it does it’s own thing,” he said, remembering the difficulty of doing a movement and having the fabric repeat it with him.

Amidst the set of challenges before him, Segovia found a fit to the “Body and Soul” concept via his struggles.

“Trying to be adaptable to all of this movement around you and to everything that is happening around us and always catching it is like trying to dance with this fabric,” he said.

The lack of an audience presents another challenge to the performers, and dancers like Segovia say a present audience usually helps bring their character to life.

“Because there is no adrenaline, the character struggles to come out and I struggle to convey what I want to express,” he said.

“You can watch a performance on YouTube or from afar but there is a disconnection,” he said.

He concluded by encouraging “Body and Soul” viewers to not hesitate attending the next performance in person when the opportunity arises.

Another performer who participated in “Body and Soul” and made the best out of her own set of challenges was FCC dance major Wilma Tsutsui.

The dancer and student choreographer for “Body and Soul” found herself having to be creative to put her peace together.

“We had weekly rehearsals on Zoom with our mentors where we would show and discuss each other’s creations and progress,” said Tsutsui.

“It could have been a lot more challenging, but we had a lot of support from Jimmy Hao and my mentor, Cristal,” she said.

Like Segovia, Tsutsui also missed the feedback and presence of a live audience.

“Dance is one of the many performing arts that needs an audience. It helps the dancer to feel their performance and communicate something all at once,” she added. Her biggest challenge however, was the lack of community that she loves.

“Along with the audience, I really missed dancing with everyone else. Especially with a couple of girls that I’ve been dancing with my entire life,” Tsutsui said.

“I love being around people and having to dance by myself in my room this semester was definitely not the same as being in school with everyone,” she added.

Tsutsui shared that performing in “Body and Soul” led her to reflect that despite her challenges and modifications, she dances because she wants to and that compensates for everything else.

Tsutsui’s two-part piece helped her find a connection with the “Body and Soul” theme.

“I left it as an abstract piece for the audience to interpret, but as a dancer, I feel that you have to be all in it,” she said.

“You have to put all of your soul in your piece. For me, it led me to reflect on why I am doing what I do and that can apply to everyone.”

Preparing for her performance did come with some benefits, like working with family.

“My brother-in-law happened to be in town and filming for a soccer team in Seattle. He helped me film my performance which took nearly three hours to complete,” she said.

Overall, Tsutsui feels she experienced both ups and downs during the process, but there were more ups.

“I learned to just go with the flow and enjoy the entire process,” she said and she concluded with gratitude for all instructors. “I think that all teachers are really trying their best to help us out. At least, that has been my experience.”

“I am appreciative of all my teachers here at FCC, dance instructors or not, because they are trying hard during these tough times,” Tsutsui said.