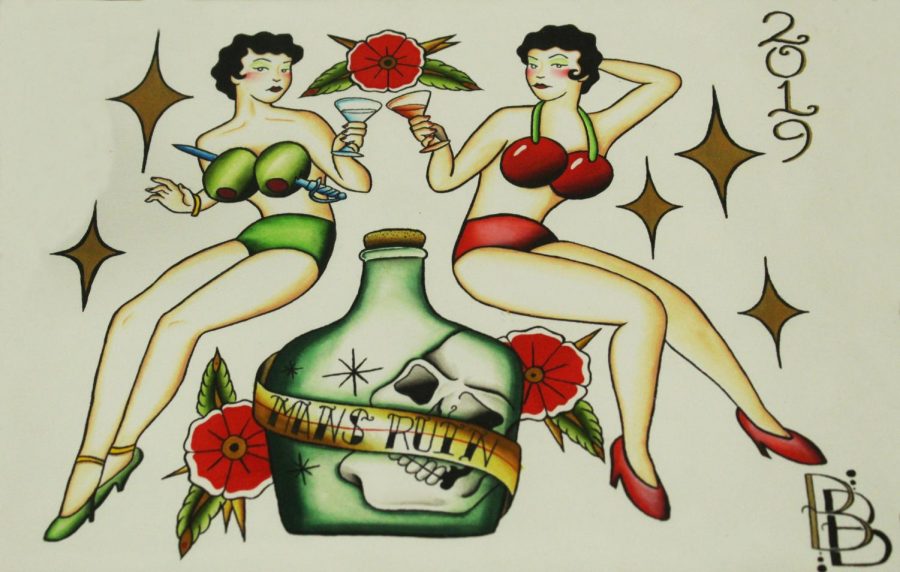 A 2019 traditional tattoo design by Byron Bush at the 16th annual Fresno Tattoo Convention on Saturday Feb. 22,2020. The convention had an estimated 20,000 attendees at Fresno Fair Fairgrounds.

The 16th annual Fresno Tattoo Convention was held on Feb. 22 and 23 at the Fresno Fairgrounds.

Attendees were able to browse the 85 different booths and pick one of the 180 tattoo artists to see what designs they liked and who they wanted tattoos from. The Fresno Tattoo Convention is held every February and attracts professional tattoo artists from throughout the United States.

The event was two days, but convention promoter Chris Earl estimated that there were around 20 thousand attendees.

Earl said most of the artists are self-taught. “Very few of them have art degrees, but it does help because you see things in a different light. You do see different colors you may use and different palettes. It does help.”

The stigma of tattoos has changed over the years thanks to TV, movies and social media.

At Fresno City College, students with tattoos are a common sight on the campus.

Ricki Hinojsa, an FCC student attending the event stated “I have seen a lot of people with tattoos. It’s something you wouldn’t have seen in high school but in college it’s definitely a lot different because people are open with their tattoos and don’t feel the need to hide it.”

Tattoos have become a source of self expression in the public eye so far that becoming a professional tattoo artist has become a more viable and widely accepted career choice.

James Peterson, a tattoo artist from Grape Ape Tattoo in Tucson, Arizona, says the best way to learn how to tattoo is to learn from another tattoo artist.

An apprenticeship is commonplace for most to get into the tattooing field which entails many new artists learning from older more experienced artists. FCC offers lots of art classes that show the basics of concept art and improving oneself in their given profession.

Families were able to look at tattoos together. Kids 12 years old and under were even let in free. The convention had one booth in particular where kids were able to get their own temporary water tattoos.

Some of the booths strayed from tattoos and some included a barber shop, clothes, photo or decaling. Attendees also had the opportunity to enjoy a live concert, food truck and bar outside of the expo hall.