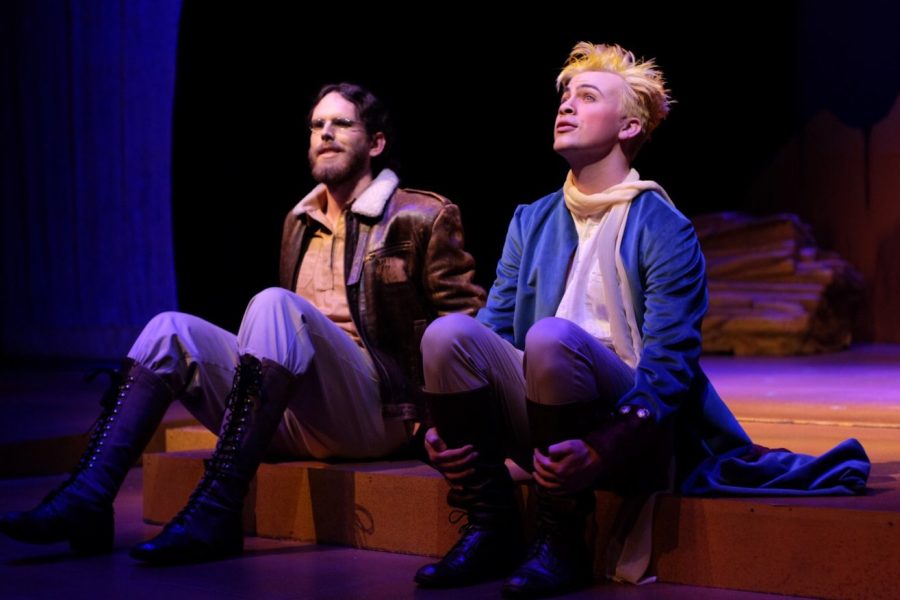 Sean Stoll as The Aviator, left, and Anthony TeNyenhuis as the Little Prince, right, discuss their experiences as they’re stranded in the desert. Photo courtesy of James Knudsen

“The Little Prince” is an experience that simply can’t be missed. While unusual by today’s standards, it’s unconventional nature is a reason to see it. The play is also a great experience for anyone who wants to reconnect with their inner child.

“The Little Prince,” based on a children’s book by Antoine de Saint-Exupery, is about an aviator stranded in a desert who meets a young alien boy, named The Little Prince, who tells the man his history told in a series of vignettes.

Though not explicitly a “children’s” play, the show is family-friendly and kid appropriate. What particularly stands out is its surrealist atmosphere. “The Little Prince” is reminiscent of stories like Lewis Carroll’s “Alice in Wonderland” or Roald Dahl books in terms of atmosphere.

In a landscape of subversive children’s media, the earnestness of “The Little Prince” is where the play truly shines. “The Little Prince” feels very different from modern children’s media, in that it lacks the pop cultural references, snarky dialogue, and jokes for the parents that have become routine in kid’s films like “Shrek” or “The Emoji Movie.”

Yet the absence of these elements makes the play feel remarkably fresh and recaptures a childhood innocence.

The story is largely told in self contained flashbacks told by the Little Prince. In effect, the play is far less narrative focused and more character driven. The play focuses with the zany characters the Prince meets in his adventures. For example, the Prince’s attempt at taming a fox. Luckily, the side characters of the play truly shine.

Much like “Alice in Wonderland” much of the story largely chronicles the Little Prince meeting wacky and interesting characters in his travels. The actors deliver hammy and over the top performances of these characters which really helps root the story in the children’s storybook tradition.

Particular standouts were Quincy Maxwell’s King, and Geovany Calderon’s Conceited Man. What made these performances notable were the actors’ ability to immerse themselves in the role. Additionally, the great comedic timing of these two actors managed to help their jokes land.

In addition to the exaggerated characters, the unique staging decisions of the play created the dreamlike atmosphere.

For example, the twinkling sound effects and the minimal usage of music felt mystical, yet eerie due to its scarcity.

During scene transitions, the play uses stage hands carrying streamers to indicate the start of new scenes. This abstract representation of a transition only adds to the play’s weirdness.

One smart directing choice was the portrayal of the drawing scenes. A major plot point is that the Aviator character is also a bit of an artist, and enjoys drawing in his sketchbook. In the play, the drawings of the Aviator are created and shown on a projector so that Aviator’s drawings are visible to the audience.