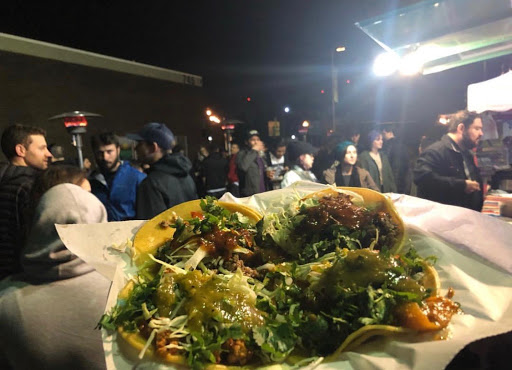 William Compton, the barback turned brand ambassador for Tioga-Sequoia, said that one of the goals of TB&J is to “break the stereotype that Downtown [Fresno] is scary.”

That goal seems closer to becoming a reality, considering the number of people who attended the event on a cold and rainy Thursday night in January.

The first TB&J of 2019 included food options such as tacos from Taco Don Chico, corn and other specialties from Sanchez Corn, and donut dessert from the Rolling Donut.

The brews were provided by Tioga-Sequoia Brewing Company, while the jams included music from two local punk bands: Squid Ink Band and The Eros Music.

This TB&J’s jam selection differed from the Latin style music that is regularly offered at the event, according to Silviano Gonzalez Jr., a barback for Tioga-Sequoia and FCC Alumnus.

Tioga-Sequoia, a local hotspot, is known for putting several events together throughout the year. They want to have events that bring people together–or at least have enough events to provide options to the diverse community of Fresno.

“We want to give people a reason to come down on a Tuesday, Wednesday, or Thursday night,” Gonzalez said.

Rodriguez credits Tioga-Sequoia for supporting local businesses through the vendors that make TB&J—as well as those promoted or included in their other events. He explained that TB&J is the sort of event where people come together to figure out what is going on the rest of the weekend.

With advertisement via Tioga-Sequoia Brewing Company’s social media, local radio promotions, flyers, and word of mouth, TB&J is one of the places to be on a Thursday night.