The First Purge is Subtle Like a Flying Brick 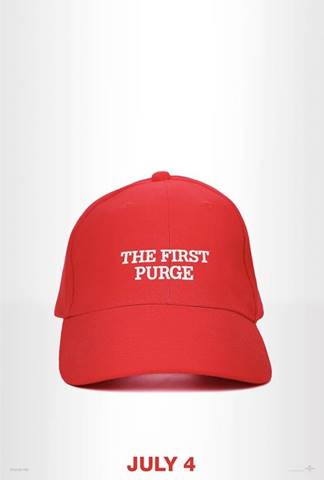 “The Purge” franchise is one of those funny little horror movie staples that exemplifies everything the mature, the sophisticated, and the critical turn their noses up at. It’s cheap. It’s low art. It’s schlocky.

But unlike the slashers of the ’80s and ’90s or the modern “Saw” franchise, “The Purge” sets itself apart with a distinct political angle. “The First Purge” takes place in an America that has been taken over by an ultra libertarian ideology called The New Founding Fathers, which has set up an experiment where all crime–including murder–will become legal for 12 hours in an attempt to “purge” aggression from the population.

It’s no coincidence that the testing neighborhoods are impoverished majority Black and Latino neighborhoods. Indeed, one of the central characters, Nya (Lex Scott Davis), is a Black Lives Matter-esque activist who protests the Purge and argues that it’s just a scheme to keep people of color down.

There are legitimately chilling moments in the film. Seeing a group of Klansmen walk into a Black church and murder dozens of women and children and then ride away with torches blazing calls to mind both the Charlottesville neo-nazi demonstrations and the Charleston church shooting and is an unsettlingly real moment to behold.

The film is chock full of masked men and women terrorizing people of color, and because the violence is up against a backdrop of political upset and civil unrest the movie feels shockingly relevant.

The film’s greatest strength and greatest weakness is the social commentary. It vacillates between uncomfortably true to life and laughably overblown. It’s one thing to show pointed racial violence involving a gang of police officers and a Black man, it’s another to have a Nazi with a gold armband strolling the halls of a run-down apartment building.

It all feels a bit quaint in a post “Get Out” world, which managed to use the lens of horror to portray living in a racist society as not just difficult but terrifying: and with tremendous film-making to boot. If “Get Out” is a finely tuned machine, “The First Purge” is a duct-taped mess haphazardly thrown together in a basement.

That duct-taped aesthetic really shines through in the film’s production aesthetics, which just scream cheap.

There are egregiously bad CGI blood splatters in this movie. There’s also terrible slow motion effects, and horrible jump scares. That’s to say nothing of the really heinous overacting from a character called Skeletor (Rotimi Paul) who is curiously absent from the film’s marketing, almost as if the movie’s a little embarrassed of his hammy performance.

Without the heavy handed social commentary, “The First Purge” is fairly run-of-the-mill. The scares aren’t that scary, the action isn’t that well choreographed, although it’s relatively well shot and audiences will always be able to tell what’s going on.

There is one piece of perfect satire. Throughout the film the Purge experiment is being covered by the media, specifically by stations like CNN which are watching the extremely violent unrest and remarking on it like it’s the midterm elections or something. “The Towers [apartments that serve as the center of the community in the film] will be the thing to watch in this experiment to see if its a success,” one talking head says, without irony, without horror.

This idea that the news media could take the new horrible status quo in stride and calmly analyze it from behind a desk in a television studio is spot-on.

“The First Purge” is an ambitious political satire. It’s just a shame the writers and the filmmakers couldn’t live up to that vision, and instead ended up with a dog-and-pony show with delusions of grandeur.