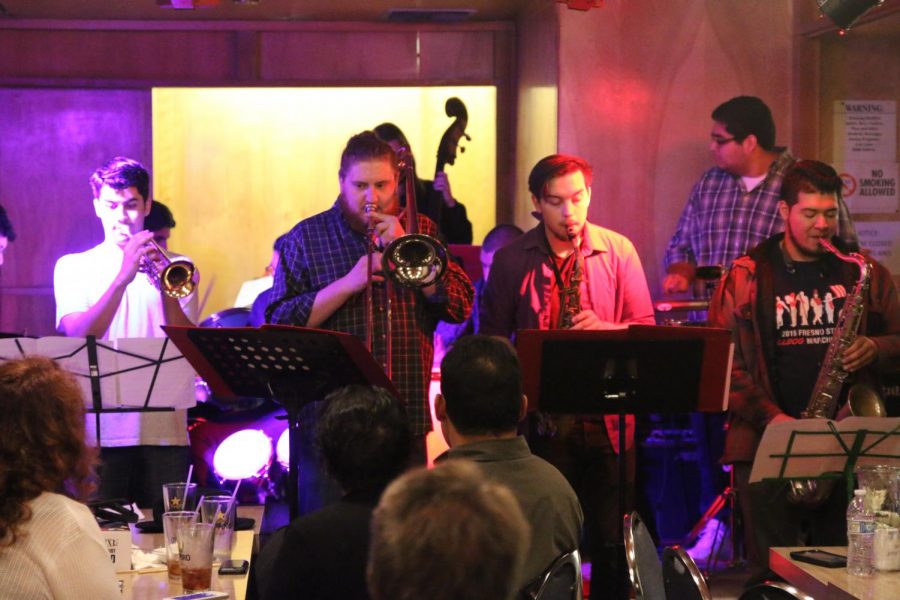 Jazz fans got a little taste of Japan in Fresno when the FCC jazz ensemble performed at Tokyo Garden Restaurant on Nov. 19. Tokyo Garden served Japanese cuisine in a traditional styled setting. The restaurant was packed with an audience ready for a night of live jazz.
According to the restaurant’s website, the Tokyo Garden has hosted many live performances for decades. Mike Dana, FCC director of jazz studies, says he has been performing in the restaurant every third Sunday for about eight years.
The night’s jam session featured many FCC musicians. Several alumni, students, and faculty shared the pleasures of live music and the many different styles of jazz. The blue, purple and red lights shined on the performers as they began their first tune.
Many in the audience tapped their feet, snapped their fingers, or swayed their head to the songs. It was a unique way to enjoy dinner in Fresno. Students came onto the stage after Dana and his quartet finished their first two songs.
The first student performer was Daniel Cobarrubias, who played guitar and sang Frank Sinatra’s “Fly Me to the Moon.” Many people sang along to this well-known tune. He said he had performed at the venue before and is enjoying learning jazz.
“Years ago, when I first started, it was scary,” Cobarrubias said. “But after a while, it’s just fun; you’re just up there entertaining.”
The night’s performances were varied, some slow and relaxing and others were intense and energetic.
The Latin jazz ensemble closed the night with incredible energy with their percussion and brass which was distinct for the night. Their performance inspired the urge to dance and toe tap. The Latin jazz teacher, George Ramirez, said it was a great night that showcased the students in the jazz program.
Latin jazz felt very different from the other performances and Ramirez said it has a different vibe from regular jazz band. He said Latin jazz gives students a different viewpoint because “Latin encompasses a lot of different styles from a lot of different countries.”
Dana says he hopes more people will support live music. “It’s great to have streaming and earbuds and all that stuff,” he said, “but there’s nothing like hearing music live.”