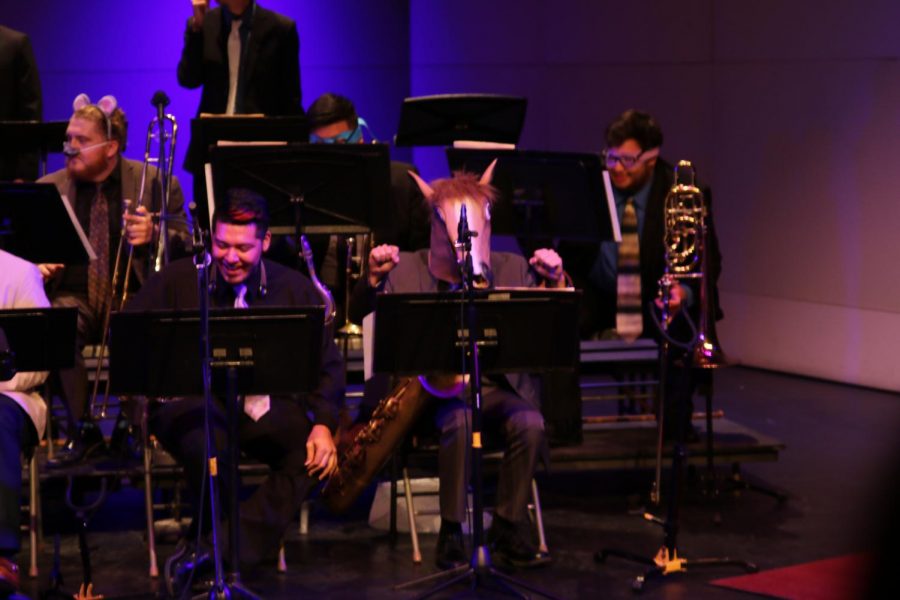 The night opened with a solo by Alayna Clarno, a Femme Fatale singer.  Clarno performed a song called, “All of Me.” The performance set the mood and the expectation for the rest of the night.

All members of Femme Fatale, which is French for “Dangerous women,” sang a soft soothing piece that filled the theatre with life. The purple and pink lights reflected off the cheeks of the singers as they performed, and the audience swayed back and forth to the tune.

“After a couple of months of preparing, it’s just feels really relieving and exciting,” Caudillo said. “It kind of sets the tone for the rest of the performances.”

Femme Fatale performed their final song “Moon Ray,” also by Fitzgerald. Each singer had a solo, and they finished in unison. The singers were powerful and they exude excitement and joy as they sang and moved to the music.

Mike Dana composed an original work called “Carving the Pumpkin” in spirit of Halloween. As Dana explained the tune, the musicians surprisingly took out costumes, fully ready to perform.

The trombone section was dressed as ninja turtles and baritone saxophone player, Blake McAllister, performed his final song with a horse mask. As they played, a surprise performer with black robes and a pumpkin head played an electric guitar solo.

The night ended with energy, laughs and applause.

“I thought it was really great. These guys work so hard and they’re so dedicated,” Mike Dana said, “and for the vocal group, same exact story.”

He added, “Sometimes people say, ‘Jazz is dead’ or ‘Jazz is for old people,’ but I don’t see how you can go to this concert and say that.”