The tragedies and horrors that have been plaguing our times serve as a constant reminder of how terrifying the world can be.

Since the time humans have sat around campfires to tell stories we have wondered what was outside the safe glow of our warm fires, but entertainment can also provide allusions and lessons that we can use in our own world. The recent rise of television horror shows that, even in the midst of all of life’s terrors, we still like to turn the lights off and watch something that will keep us up at night.

The success of cable TV shows such as “The Walking Dead” (2010) and “American Horror Story” (2011) reignited audience’s interest in more dark and disturbing stories. The slew of horror shows that followed, such as “Bates Motel” (2013), “Hannibal” (2013) and the more recent “Stranger Things” (2016), highlights that there are a lot of people who are curious to explore the darker sides of humanity.

Many people would ask why one would want to see a group of zombies devouring the flesh of a TV character who they’ve grown to love, or what would drive any sane person to want to watch a show about the ghost of a school shooter trying to impregnate a woman so she can give birth to the anti-christ.

Besides the thrill we get from jumping in fright, the horrors that are portrayed on the big screen and on TV shows reflect the horrors of their time. We can learn things about people from exploring darker themes and know what to watch out for in the world, but more importantly in ourselves.

The Universal monsters of the late 1920s and 1930s such as Dracula, Frankenstein, and the Wolf-Man, were monsters that were still somewhat human, and from a foreign country. Such fears reflect the fear that many people in America had for what they saw as a horde of immigrants invading their home and threatening their ways of life.

The fear of Communism and nuclear weapons in the 1950s is obvious in such films as “Invasion of the Body Snatchers” and “Them!”. The 1960s brought the monster next door with Alfred Hitchcock’s “Psycho”; the killer was us, the killer could be the nice boy next door.

George A. Romero’s “Night of the Living Dead” is seen as a metaphor for the Civil Rights Movement; a new generation literally eating the old one and setting up a new order for the world terrified people in 1968.

America’s invasion of Vietnam brought to the the television screen graphic images of death and destruction in war, and many people felt disillusioned by their government and country. “Last House on The Left” (1972), while an extremely violent exploitation film, left the characters in moral ambiguity, an appropriate allusion to the moral grayness America found itself in.

John Carpenter’s Halloween (1979) set off the slasher genre. The 1980s slasher movies about teenagers who have sex and do drugs get their comeuppance by a masked killer could seem to be a metaphor for the fear of the AIDS epidemic that was gripping the country.

It seems that by the 1990s, the horror genre seemed to become a parody of itself, and the Scream series somehow was able to make that scary. However it seemed that pushing the edge seemed to be the direction the genre was going, and with the Saw series, it seems like these movies continually try to top one another.

Fast-forwarding to the current decade, there are certain trends in our horror entertainment. The “Paranormal Activity” series can be seen as a metaphor for our fear of the government tracking our digital lives; the fear that someone is always watching us.

For a while, there was a slew of demonic possession movies such as The Last Exorcism (2010),  and The Devil Inside (2012), this fear could stem from the fear of seeing ourselves as responsible for our actions, and that some foreign entity drives us to do bad things.

Current shows such as Black Mirror, while more sci-fi than horror, highlights the terrifying problems that can arise with advancing technology, and American Horror Stories has featured themes involving racism, sexism, and family.

There should be no shame towards people who are interested in stories about haunted houses, and zombies, and guts and bloods and gore. Perhaps the people that look for the things that go bump in the night are better prepared for the horrors of the world, and are able to control their darkness better than people who completely stay away from it. 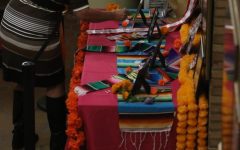 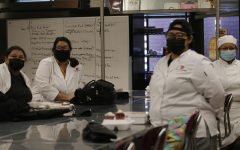