Drying shirts. Abandoned buildings. Empty classrooms. Vast farmland. While these images may seem unrelated, they come together in the latest exhibition at the Art Space Gallery, “Driving on the Rims.”

The works shown are by Fresno City College fine arts instructor Kevin Stewart-Magee and display a variety of techniques. This showing works as a teaching tool for his art students by visually demonstrating the differences between the many mediums used to make art, such as an oil painting versus a crayon sketch or using unconventional tools.

Working with oil paint, which has a long drying time, allows him to easily edit his art in order to visually show the movement of the paint by the tools.

While the images illustrate a multitude of technical skills, they each tell different stories, with the works being named after song lyrics and folk music. Stewart-Magee’s artworks serve as a commemoration to both the people in his life, and the working class people that make life easier for the general populus.

“Blue Ghost” is an oil painting, presenting a blue work shirt hung up on a clothes line to dry. It is just one of many depictions of work shirts drying in the air.

“They are the actual shirts that people wore when they were helping me with projects: my father, my mentor, a musician who was a really close friend,” Stewart-Magee said. “In a really short period of time, I lost several of the older men who were closest to me and it was very strange to still have their studio clothes neatly folded in the corner.”

The shirts started out as drawings based on the idea of them being the ghosts of people who were once a part of the world and have contributed to other people’s lives without them even knowing.

“I’m living in a haunted world; I’m surrounded by the ghosts of all these people who labor so that I can make something beautiful and pursue my passion,” said Stewart-Magee.

Born in the suburbs of Ohio, Stewart-Magee got his start at a young age through his father who would help him plan out his art. In high school he expected to get an athletics scholarship, but due to an injury, his life changed course. With support from his art teacher and family, he received an art scholarship the following year.

“He’s an amazing teacher,” said Amber O’neil, an anthropology major. “He uses concepts that unless you’re taking art [classes] you really wouldn’t understand, but by the end of his course, you get it.”

This exhibition on campus is Stewart-Magee’s first art showcase in Fresno. It serves as his introduction to the local art scene, after years of listening and engaging in the Fresno art community.

“Since I’m teaching the mural class and the painting class, I really want people to say ‘Oh yeah, I think this guy can teach me a thing, maybe two things’ and that the conversation in the paintings is something that is accessible,” Stewart-Magee said.

The exhibition opened on Nov. 7, giving curious students and campus passers-by to take in the instructor’s work throughout the month.

“I think [the exhibition] is very pretty,” said Shireen Klein, a history major, “and you can just see the passion he has.”

“Driving on the Rims” will run at the Art Space Gallery until Dec. 8. Following this exhibition will be the Student Holiday Show & Sale on Dec. 12.

“Half this show is dedicated to [my students], for them and is done in conversation with them,” Stewart-Magee said, “and hopefully I’ll meet another 2,000 students while I’m here.”

A reception will be held during ArtHop, a local art event, on Dec. 1 at 5 p.m. Stewart-Magee and other artists will discuss art at 6 p.m. at the exhibition. The reception will be open until 8 p.m., giving people the chance to view the numerous earth-toned landscapes.

International Students Strut Their Cultural Diversity on the Runway

A Review: ‘Knives Out’ Modernizes Mystery

“Knives Out” was able to do what no other recent whodunnit film has been able to do: be good. That’s not a dig against the other mystery film... 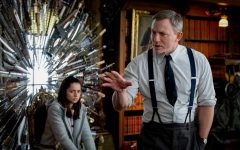