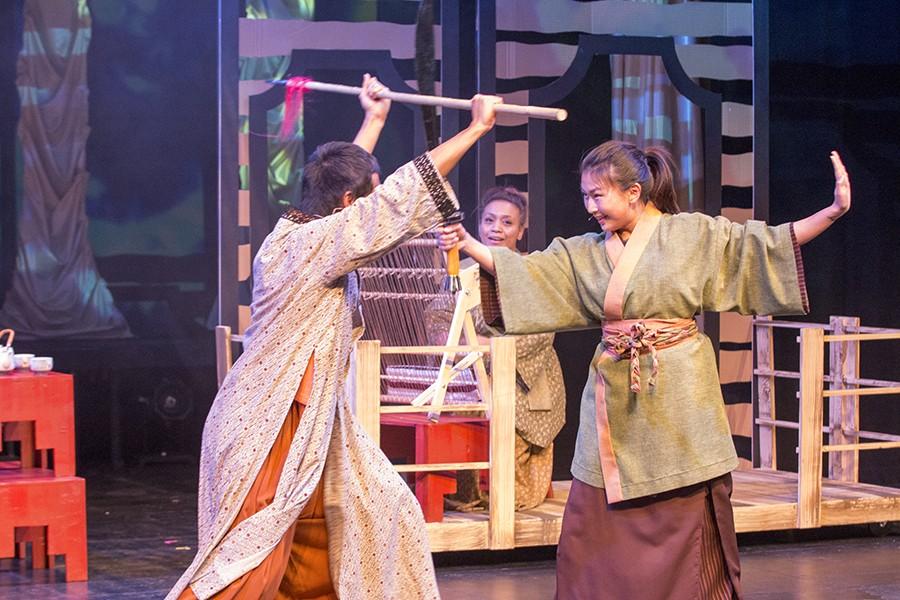 Adam Zakaria and Thuy Duong perform a scene from "Mulan and the Battle on Black Mountain" in the Fresno City College Theater on Monday, Feb. 22, 2016.

The untold and true story of Chinese folk heroine Hua Mulan is making its grand debut at the Fresno City College Theatre with “Mulan and the Battle on Black Mountain.”

Professor Debra Erven, director and costume designer for the play, said she is thrilled that “Mulan” was chosen as the year’s first theatre production as well as the opportunities it provided to collaborate with other faculty. This production will most likely serve as Debra Erven’s last venture in the director’s seat.

“This is a simple story of a young girl who experiences war and grows to be a woman,” Erven said. “Thuy Duong [playing the main character] is doing a beautiful job of creating the character of Mulan.”

The epic tale of Hua Mulan is well-known in China, and nearly everyone in the U.S. is familiar with Disney’s Mulan which was released in 1998 and became an instant classic.

“It [the story] comes from a short poem, and depending on which province of China you are from, the story changes slightly,” Debra Erven said. “The fable about the ‘Woman Warrior’ has developed into folklore, literature and, of course, the Disney movie.”

The production results from a collaboration of three FCC instructors in the theater and dance department: Jimmy Hao, Debra Erven and Chuck Erven. “I have wanted to work with faculty member, Jimmy Hao, for some time,” Erven said. “He is such a good dance instructor and resource on Asian performance that it seemed a shame not to collaborate on a project.”

To get started, the department created a Special Studies class that Hao is teaching in which students are learning the Chinese language, culture, movement, and choreography.

“Each day is a new adventure for the students in the cast,” Erven said.

Award winning playwright and theater instructor, Chuck Erven, developed and wrote the script for “Mulan”. A public reading of the play took place in November, and since then, it has gone through some rewrites and revisions.

“Through his extensive research at the San Francisco Asian Museum, the Musee Guimet in Paris and other Chinese literature resources, Chuck Erven was able to write a beautiful play that expresses the story of Mulan,” Debra Erven said.

It is this timely collaboration with Hao and Chuck Erven that has launched the production of Mulan – and these very collaborations have become Director Debra Erven’s favorite aspect of the play.  She said she has enjoyed working with every crew member, and everyone, from the choreographer of the fight scenes to the stage managers, has been fantastic

Along with directing the play, Erven also serves as the production’s costume designer.

“The costumes are based on photos, drawings and inspirations of literature of the time period,” Debra Erven said. “We have a large inspiration wall that is used by everyone involved in the project.”

She added that because she is directing the play, “Everyone in the costume shop is pulling extra duty to make sure that it all come together.” Erven teaches costume design.

“We have a few rentals from South Coast Repertory, a generous donation from the ‘Shen Yu’ dance company that was just in Fresno, as well as a few items from China,” she added.

“Mulan” features stunning costumes, a thrilling tale of adventure, and a hardworking set of cast and crew. It’s an event that will awe, inspire and spark an interest in future productions.

Debra Erven said that the “technical elements should be gorgeous.”

“Mulan and the Battle on Black Mountain” debuts at FCC Theatre on Feb. 26 at 7:30 p.m. and will run from Feb. 26- March 5. Mulan is a family friendly performance. Mrs. Erven said, “I am hoping this production inspires students to attend other FCC Fine and Performing Arts productions.”